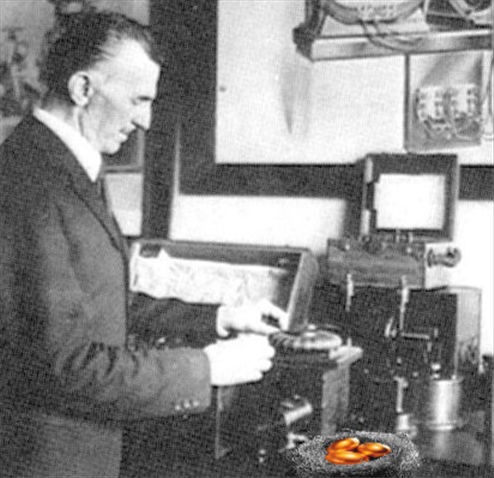 I personally think that Aesop’s fables, besides being an ethical and moral educational teaching, (albeit in a careful concealed way) are a means of preserving and transmit information and knowledge that comes from an unknown origin, probably from a pre-human civilization.

“Here it should be noted that, as our Lord has said,

one should do not cast pearls before swine,

With those words Dante (that is also known as one of the biggest Initiated of that time) warns us about sacredness of Aesop’s fables; he warning not to reveal the hiding true meaning , because as Jesus Says, “one should do not cast pearls before swine” then he specifies and emphasizes that both who discloses and who receive (when the receiver is a swine) will be harmful.
Then Dante continues:

“..And as the poet Aesop says in his first fable,

a grain is worth more than a pearl to a cock, and he therefore leaves the one and takes the other”

The statement warns that anyone, that by his own nature, is not ready to receive a teaching, rather than appreciate the pleasure of knowing, he will use the information for his own interest, for  evil purpose.

In other world, evil people are more attracted by trivial and external aspect of things (pearl  or  daisy   intended  as  precious thingss) rather then their inner and real value (cock leaves  the ” wheat” grain, a good food  and prefe to feed  himself with  pearls that have no nutrients )

In the further paragraph, in a synthetic and extremely beautiful way, Dante is recommending us to read these stories carefully, because only in this way it will be possible to find,first the room and then the noble woman who lives there (woman here means Philosophy or science):

”Considering this, as a precaution I direct my canzone to reveal its purpose where this lady, namely Philosophy, is to be found. This most noble lady (philosophy) shall then be found

when her dwelling-place is found, that is, the soul in which she dwells”.

One of the most famous Aesop’s tale is certainly “The Goose That Laid the Golden Eggs “which in summary, tells about a farmer who is not happy to receive a golden egg for each day, so he decided to open the chicken belly to extract with a single operation all the valuable content.
But the improvised surgeon managed only to kill the goose, which (poor thing) didn’t hide anything in his bowels.
You dont need to be an analyst or a psychologist to understand that this story has not pure entertaining  purpose; at the same time it is too abstract to teach ethics because it is illogical and inconsistent. In fact to be honest, (I invite you to read the original) I cannot even consider it a fairy tale because it doesn’t makes you dream about it, as it does not have reference to the daily reality and it is not teaching education.
Without going too deep into the story’s anomalies, with the risk to lose the aim of this document, I would like to emphasize that if the lucky farmer was not happy there must be a reason.
The farmer at each brood (daily) obtained a golden egg which means that he received daily at least 200 grams in gold, a value that is able to satisfy any greedy desire; Beside this, even without taking in consideration the known prudence and wisdom of peasants (who ponder before acting), I do not believe that someone could have killed or hurt a so gorgeous bird.
However if the egg was not completely gold, but only the shell was gold, then the plot of the story and the reaction of the farmer was taking logic sense and justification. In fact the only shell in gold weighs few grams.
The golden eggs are not only found in Aesop’s fable, but also in many legends of every country.
Hindus say that all God power is contained in a golden egg; Finns believe that all the Creation sun,Stars etcc were generated from a golden egg, a similar myth is said by Buddhists and also the idea that birds, and in particular doves witch very often  represent  the arrival of abundance or a radical change and…   it is possible to go on.

Tesla (1856-1943) was a scientist and his invention has greatly improved the quality of our lives.
The greatest inventions of this real genius, while being enormously useful and used, were not able to give Tesla the deserved rewards, because Tesla died poor spending last year’s o his life abandoned in solitude in a New York hotel.
Various Tesla biographies, regardless of who wrote them, looks virtually identical and; they look amazingly similar even in exposition style.
Those biographies are so inconsistent and unbelievable that they look like they are part of a premeditate plot; actually they are so false and contradictory that with a little bit of attention it is easy to detect lies from real facts.
I wish to say that the real facts are certainly the ones that in the biographies seem unusual, eccentric or fanciful.
Without going too much in dept, and to remain in the aim of this little works, I wish to extrapolate from the biographies a passage which refer to the last period of Tesla life. Here following the text:
“Tesla, neglected by everybody, he was leaving with the only support of a small pension granted from Yugoslav Kingdom in a New York hotel. His favorite pastime was to look after pigeons. For his pigeons he had built a shelter and next to it a place of care, and he was giving full attention to their diet, in fact he prepared  and feeded the birds with a special recipe of his invention ”
It is also tells about a great friendship between Tesla and a special pigeon; this friendship was so great that when the beloved pigeon died, from the bird small eyes, arose an intense bright light.
No need for deep investigation to realize that Tesla poverty was quite unusual.
Our poor man in fact was living in “New Yorker” hotel and here is the picture of the hotel: 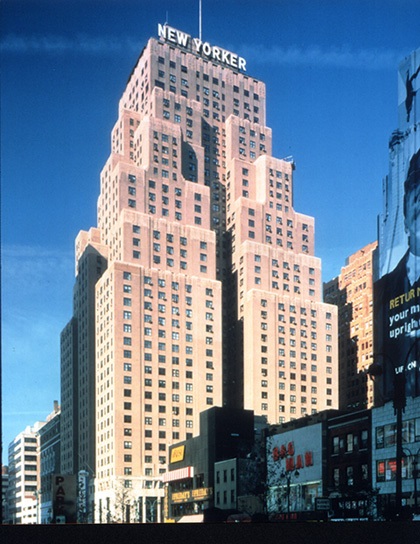 Obviously Tesla was not staying in a regular room but in a “suite” so, in my modest opinion of course, Tesla knew how to integrate his modest pension.
Among Tesla’s manias, it looks that there was a fixation for number”3” and its multiples.
This number  (three) does not looks like it is connected with  matematic or cabalistic reference, but most probably it is referred somhow  to an alchemic memory , where number nine is rapresenting  walnut tree, while number three is  its fruits that is  also the trinity symbol.

This symbol or number three in particular is referred to the femminine flower of this three, that often blossom in couple of two by two , where the shape somehow remind about number three.

The shape of the gem is somehow reminiscent of the number three.

I point out two additional information about this very common tree very peculiar:
1) It has the property of being self- fertile in fact the same tree is producing at the same time flowers female and male.
2) Many God’s and Jesus representation and also about various deities around the world are drawn inside an oval (a side or a quarter)  that looks like the picture of a  nutshell;  the oval shape can be indentify with a  nutshell for thickness and  wrinkle  aspect that are not typical of eggs.  What makes us lean towards the walnut idea, is the shape that is frequently quite pointy both at the base and at the top, the thickness used for the profile in the picture that is too thick in proportion to represent an egg shell, and from the opening that separate left side from right side that is used to separate two sides. An egg cannot be separate sharply in two sides or in quarter as some myth says and how it is shown in several sacred pictures.

In this picture it is possible to notice the particular layout of the angel’s cloaks on the board at the right side of the egg. 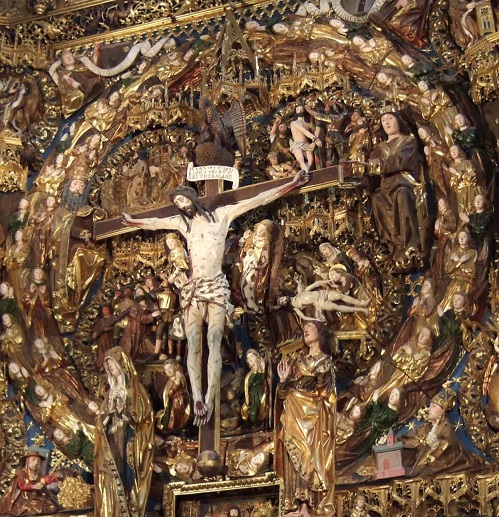 It is possible to connect this oval picture enclosing Gods and Saints to the very old concept of Cosmic Egg , but some clues are giving more consistence to the walnut idea, than the egg one; or at least, it give the idea of a certain connection between the two symbols , like in a way, the two concept are mutually or sequential interchangeable

The today legacy with the past are everywhere, on frames, mirrors, portraits, paintings all very well framed by a rich and well-carved oval.
What can be so peculiar about nut tree and his flowers to arise all this attention? What role might it have?
I guess two following  hypotheses,  cinder  resulting from  flower or  nut shell of walnut tree  can be :

2) It can be a powder that shall be add to some cooking recipe to achieve some unusual effect.

Before going on we need to clarify a very important Physics concept that we will use here following: “transmutation”.
Transmutation is a natural or artificial process through which it is possible to transform an element in another one. For example uranium can transmute into lead, and this reaction is applicable to almost all the elements that constitute up matter.

The transmutation concept was used by alchemists before being used commonly in physics. Fort alchemists transmutation is a process by which from a basic poor substance   through various chemical reaction and refining it is possible obtaining gold (means as metal) and spiritual elevation.
In modern physics transmutation is an ordinary concept, a phenomenon commonly used.
In nuclear reactors for example they occur normally, and through special devices it is possible create new material that does not exist in nature.
Some of transmutation that occur in nature are well note, like for example the carbon decay is used normally for dating organic substance age.
According classical physic it is not possible to obtain transmutation quickly or without a lot of energy, but not all researcher however think this way.
The first one that has had some doubt about the relationship transmutations- energy was Kevran, a French scholar that disclosure (working very hard) the biological transmutation concept .
Biological transmutation according to Kevran’s theory is a transmutation that occurs normally in living organisms (in real time) without the use of any special amount of energy.
Kevran did experiments on the transmutation of potassium in calcium and in particular, he collected information’s and showed evidences about anomalies in bird’s eggshells creations.
In birds case the anomaly was determined by the fact that the egg shell contained more calcium that the one introduced through feeding.
Kevran experiments showed that birds enclosed in a controlled environment , despite been nourished with food lacking calcium, were able to produce eggs (with shell)
Obviously the food was a special one containing substances such as aluminum silicates and potassium silicates.
Potassium (tartaro) has a great importance in chemistry and can be extracting very easily as carbonate from plants ashes, so it is possible that walnut tree and his flowers can be particularly indicate for this purpose. The creation of silicate is very easy, as you only need to combine ashes with sand and put the mixture in a high temperature oven.
In summary:
– Aesop tell us that since long time is acknowledge that shell can be made of gold
– Kevran discovered that birds are able to make biological transmutation
– Tesla was maniac for number 3, and he is not the only one as for example Dante became psychopath for nr. 3
– Tesla loved pigeons and when he dies his favorite pigeon emitted light (it probably became radioactive  )
Is it possible that “nocino” liquor is the real elixir of life?